I try to achieve a menu like this (this is the actual menu). 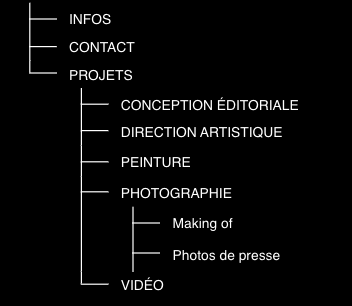 There is a tree of projet coordinated by the wordpress menu that manage route and navigation.

Here is a scheme of the menu and the corresponding route.

I need to get this menu in Js and in php, so I created a class in order to parse the menu returned by wp_get_nav_menu_items. You will find the class FP_Nav inside fp_nav.php this git gist.

As the route doesn’t really exist while it’s set in the wordpress menu as Custom link (ie. /paint, /video in the below scheme). I use an action do_parse_request in order to prevent the native parse_request if the url match some of mine in my menu and let the parse_request execute if not. (find my custom “router” in fp_router.php also in the previous git gist

Here is my functions.php (in the same git gist) in order to know the order of how it’s executed.

I declare my CPT in the action init but I suspect that my class FP_Nav is loaded before the CPT is loaded because in the index.php (template file), the menu got every fields and if I declare the CPT outside the init action as well.

Also I have to load this class BEFORE the headers are sent so I can move out the CPT declaration outstide the init action but I’m not sure it’s a good idea and somehow I would like to produce good code so if there is another solution, I’m on!